Christmas Craft/Thanksgiving part deux. My life is incredibly good. I am truly blessed. The most important thing to me is my family. As long as everyone is ok, I’m ok. I fret, I worry, I implore the higher being that watches over us human fools to no avail when I think things are not going as they should in my fragile little world.

Life is indeed good even with the bumps that have lately popped up in my road. The people in my family that have been sick are all on the mend and back to work. I am thankful for both of these things.

The move at work is almost complete and going much smoother this week, so work life is settling down. Hubby only has 5 days left to retirement. I am so looking forward to having a house husband to leave our weekends free. We are happily moving on to the next phase of life. I am thankful he is able to retire while still young enough to enjoy life more because he has worked really hard to provide for our family for almost 40 years.

I am thankful for our extended family. Our house was full of laughter, fun and love the last two days while we celebrated the Thanksgiving holiday together. We ate good food, reminisced, and made this year’s Christmas Craft and shopped. I am thankful for each and every one of my family both near and far this holiday.

I’m making a new resolution that can’t wait for January. I will look at the bright side and will be thankful for big and little things. Especially remembering the little things because they make up my day to day life.

Here are some of the pictures of our Christmas Craft this year.

Filed under Choose to be happy, family, Optomism

Now for Something Completely Different

And now for something completely different. The challenge of the week is fun. It makes me think and stretch my chops as a writer and blogger.  Check it out here and write along. http://dailypost.wordpress.com/2012/10/08/weekly-writing-challenge-and-now-for-something-completely-different/

I am one of the bloggers that has one foot in the technical, informational posts and one foot in the personal posts. I originally had one blog where I wrote about my fiber arts and my quest as a newbie writer. Then I worried that I was boring the handful of readers I’d collected and decided to split the blogs apart so said handful could decide which interested them, either or both and have the choice.
Both of them have posts that are technical, such as knitting techniques and writing/publishing links and references. And both of them have bits of my personal life woven in. I am always hesitant to post blogs that outline my day or those that give too much of me to the world.

I don’t really post opinions about things I feel strongly about because there are plenty of soap boxes out there with people shouting from them without me adding to the din.

Since this week’s challenge asks for something completely different, soap box it is. 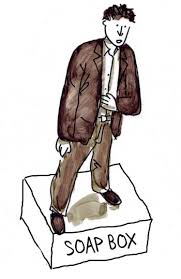 Politics. Only second to religion in controversy. (One shaky foot lifting slowly, every so slowly up to the rough pine boards of the box)
I HATE POLITICS. Politicians are a rare breed. They bluster and bore, lie and promise. Who are the real people behind the red, white and blue masks? I don’t know and I don’t care.

One party is as bad as the other. Unless you live in Illinois. Then some of them have dropped to new lows by becoming felons. (Seriously, two of our last three governors are in federal prisons right now!)

I am tired of listening to one candidate trash the other and the second candidate trashing back during every commercial break. The papers are slanted. Television news shows are slanted and there are excuses abounding from both sides.

Some people live for politics. Good for you, grab your own soap box and megaphone and go to town. This is my soap box of political apathy, so listen or walk away. We live in a free country. 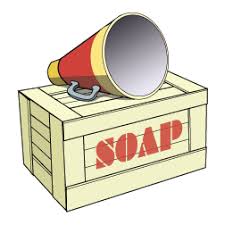 We are promised change, but the only changes I’ve seen are not good. Unemployment is still rampant. Don’t start shouting back at me that the numbers are down. Of course they are, people have been on it so long they have dropped off because they’ve used up all of their benefits. You say I don’t know what I am talking about? HA. We had a big RIF three years ago at work. Less than half of those workers have found jobs and those that have not are no longer eligible for unemployment.

There there is health care. Don’t get me started (pulling the second foot onto soapbox because now I am getting into this) because I personally know someone was critically ill for over two years after being laid off work because his department was closed. No insurance, 72 days in one hospital, also in 2 other hospitals, literally was given less than 30% chance of making it and didn’t qualify for any government health assistance. Now said government wants to require him to purchase health insurance or face a fine if the new laws got through. He can’t afford his RX, make enough money to live on his own yet and would have starved to death with out help from his family. How are people like him supposed to pay for government mandated insurance???? As a politician. I am sure they have a list of pat answers ready to spout.

Then there is voting. Maybe I can make a difference in a local election. But I seriously doubt my vote for president matters at all. Apathy abounds! But then again, look at the voting record of your state reps and congressmen. Most of them don’t show up to vote either.

Do you think I am anti-American? If so, you haven’t seen the flag waving behind my soap box. I love this country. I love the freedoms and opportunities the USA provides. It is the politics and lobbyists and special interest groups that I abhor. 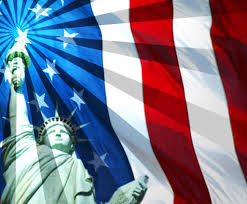 If one politician ran without a huge war chest of money collected from groups and individuals that weren’t expecting something in return I just might put a sign in my front yard. But until then, I am sick and tired of being lied to. Don’t promise me anything you can’t deliver. And quite talking about how much you have done to make life better when it is all smoke and mirrors.

But for now I am carefully stepping off of my soap box, folding up my unpopular opinions and picking up the story I am working on and my knitting needles.

Wow. Being different from my usual me is exhausting.