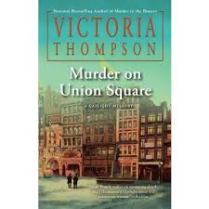 DISCLOSURE OF MATERIAL CONNECTION: I have a material connection because I received a review copy for free from Penguin First to Read in exchange for a fair and honest review.

Frank Malloy and his wife Sarah are looking for a killer in the latest Gaslight Mystery by award winning author Victoria Thompson. When Malloy is found with bloody hands over the body of a dead man, the local police figure they have an open and shut case. Malloy, former cop turned PI is not a favorite of the precinct which just adds more fuel to the fire. And if that isn’t enough to get him in hot water, the dead man needed to sign custody papers so that Sarah and Malloy could adopt the victim’s daughter, which according to the police, gives Malloy the perfect motive.

Sarah quickly bails Malloy out and rounds up Gino (Malloy’s partner) and Maeve (Sarah’s right-hand gal) to start investigating the murder to clear her husband’s name. The problem is there is an unreliable witness that claims Malloy is the killer. It doesn’t help that it happened in a theater full of actors, all of which seemed to have an ax to grind with the victim and his girlfriend. Everyone seems to be lying or hiding something from each other and the investigators, who must pull out all stops to find the truth, clear Malloy’s name and put the real killer behind bars.

This is the twenty-first book in Thompson’s Gaslight Mystery Series. It is the first one that I have read, and it works as a stand-alone novel. There were a few times I was fuzzy on who a specific character was for a page or two but Thompson skillfully gave enough information to put them in context before the end of the chapter. It is no surprise that she is a #1 Best Selling New York Times author as well as Edgar and Agatha nominee.

Murder on Union Square is tantalizingly engaging. I love the depth of characters as well as the twists and turns of the storyline. There is something cozy and comforting about historical novels that draw me in immediately. While I am thankful for cell phones and modern forensics, it is refreshing to have mysteries that are solved with shoe leather and wit.

Somehow I’ve missed out on Thompson’s series before now, but cannot wait to put the other twenty on my wish list. Anyone who is a fan of captivating historical mysteries and realistic characters should do that same.