This week has been hotter than hot with a smattering of thunderstorms to keep us on our toes. I am so thankful to have air conditioning in the house, car and work. So I really don’t have any excuses not to knit. Especially when working on a small project.

The scarf I am making for Christmas is coming along really well. It is a simple feather & fan pattern, so I don’t have to think about what I am doing except on the lace row. That makes it perfect for knitting on break at work as well as in the evenings while watching the Cubs on TV. 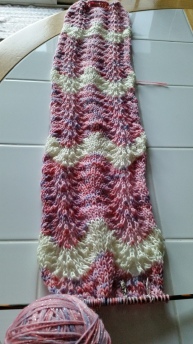 Until the blocking is done, it is hard to see the lace, so I pulled it out on the needles to help a bit. The rows of yarn that look white are the UV color change fiber that will turn purple in the sunlight. So it will be a fun scarf to wear, sometimes pink, purple and white, sometimes pink and purple. The variegated yarn also has a bit of glitter so there is a lot going on. That is why I wanted a simple pattern.

Other than the scarf, I haven’t started or finished anything this week. I got the yarn for a baby blanket for a friend of mine as well as some Bernat Pipsqueak to make more NICU hats. The nurse that takes them in said right now they have 25 babies in the unit. I need to knit faster!!

Until next week, keep cool and knit on. 🙂

Last night I was fortunate enough to be invited to a knitting group by a dear friend. We don’t see much of each other in person, but keep in touch with FB and Words With Friends. We’ve been chatting about forming an informal knitting night, and Judy graciously invited us to her home.

We chatted, catching up with old friends and met new friends. Our common bond of fiber gave us plenty to chat and laugh about. New knitters and seasoned knitters worked on on blankets, washcloths, scarves and shawls. I started the scarf for my cousin’s Christmas gift earlier this week, so that is what I took along to work on.

Judy has some great ideas for our new group. She collected email addresses and is compiling a resource list of yarn shops, websites and tips. I am very excited to hear she has the info to visit local farms that raise Alpacas . Who doesn’t love baby alpaca??

Judy shared a tip I can’t wait to use. When working a pattern where you repeat several rows for a pattern, she writes each row on a separate index card. No more counting, making marks, etc to see where you are in a pattern, you just flip the card to the back of the stack and go to the next card. When you stop for the evening, clip them together and you’ll know exactly where to start the next time you pick up your work. I love this useful tip!

To top off the night, Judy’s husband made each of us a beautiful hand turned Nostepinne. If you (like me) have never seen or used one, here is the description from The Woolery (http://www.woolery.com/Store/pc/Using-a-Nostepinne-d38.htm):

“Nostepinne” or “nostepinde” is a Scandinavian word that means “nest-stick.”; the original Ball Winder. It is a tool used to wind a center-pull yarn ball. A nostepinne is portable, easy to use, and creates a center-pull ball that can be used without changing the twist in the yarn.

I tried using mine tonight. It is going to take a bit of practice, but I am getting the hang of it 🙂 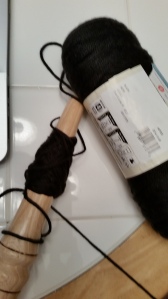 When we meet again I am going to bring the pattern and yarn for the NICU unit baby bear hats. Meantime I’ve finished my sweater, but it needs the buttons and to be washed/blocked. I’ll have pictures next week.

I hope you all have a friend or a wonderful group to hang out with and knit. Or crochet. Or Quilt…you get the idea 🙂

This was posted on my sister blog – but thought followers of writeknit might be interested in how I review and rate books. 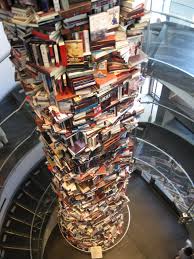 I have been reviewing books since 2011. Most of them are sent to me, so for a reader, being paid in books is basically skipping the step between paycheck and going to the bookstore. Win/win in my estimation.

As a writer, I know how difficult it is to put words on paper. Especially words that someone else will read and love as passionately as I do. Enough to have them want to tell other people to read it. That means more than the writer’s family  and friends read whatever it is that is being written. It can be is a  short story, a book or an article.

Reviewers have the task of reading a book and sharing his or her thoughts with as many people as possible. I do not take this task lightly. But always keep in mind – it is only my opinion, I book I love could be…

Helloooo! I’m back after a 10 day vacation and a week of recovery of said vacation 🙂 The first few days were spent in North Carolina and Virginia, then we spent 4 wonderful days with our youngest son and daughter-in-law. I’ll do a post later highlighting all of the fun places we went and things we did, with the exception of the first little town we stayed in, Black Mountain, NC since it is linked to a future WIP.

We stayed at the Red Rocker Inn, and yes there are red rockers in all sizes on the fabulous front porch of the B & B. In the evenings, hubby and I sat out on the porch, chatting while I crocheted on the purple sweater I’ve been working on. I only have a few inches left, then the trim. I am pleased with the way it is turning out. 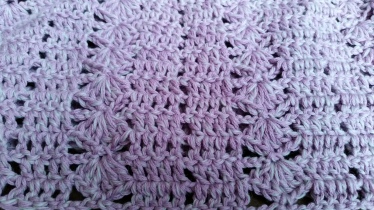 This is a closeup of the pattern.

Black Mountain is a great little town with shop after shop of artisan crafts to admire and purchase. I was ecstatic to find a local yarn shop nestled between a Dulcimer shop and a great restaurant – The Trailhead check it out here: thetrailheadrestaurant.com ,

I know what you are saying, since I shared my stash closet pictures, what is this crazy woman thinking?? I’m thinking I need some local yarn. Hubby is the best, I was touching all of the yarn, looking for something local and he didn’t even sigh. Nope, not once. Yarn is the best souvenir in my opinion. I get to remember the trip the whole time I use it to make something.

I picked up a wonderful skein of wool hand dyed with lupine native to the area and some had made buttons for my sweater. Here is the yarn and I’ll share the buttons when I finish my sweater. 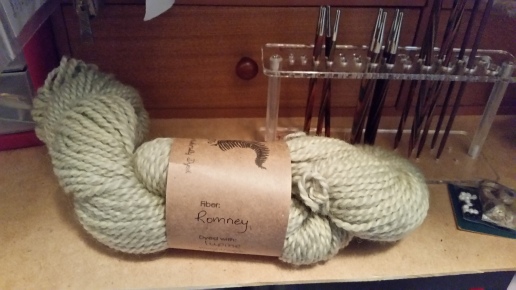 I think it will be enough to make a warm winter hat. I’ll probably save it until after the holidays as I am starting to think of all the things I want to make before them.

I have to confess I also ordered 2 skeins of yarn to make my cousin a scarf for Christmas. It is Abracadabra made by Hikoo yarn, and looks like a whitish cream color until you get it in the sun, then it turns purple. It was pricey and the skeins are only 50 grams of DK weight, so I am going to pair it this skein I picked up last year that is pink & purple with a bit of sparkle. I can’t wait to start it, but want to finish my sweater first. 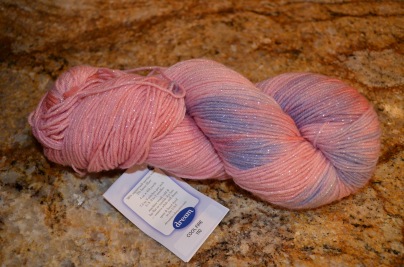 I feel pretty good about my progress this week. I just might finish my sweater before next Wednesday 🙂 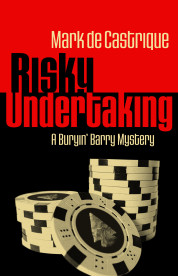 Barry Clayton wears two hats in his hometown of Gainesboro, North Carolina. He is a part-time sheriff’s deputy and a full-time undertaker. In Risky Undertaking his two professions are on a collision course that can’t be stopped.

At a friendly poker game, Barry hears of an expansion deal on the local cemetery owned by Mayor Whitlock. Whitlock has called in the press, already excited about the grand opening of the newly acquired land. Unfortunately, at the groundbreaking ceremony dirt isn’t the only thing found in the posthole digger’s claws – bits of pottery and what appear to be human remains are unearthed also. The land is close to the Cherokee Reservation and all digging must be stopped until they can determine if this was once a sacred burial site.

The hiccup in Whitlock’s plan could not have come at a worse time. The Cherokee are upset about the possibility of a new casino coming in owned by the Catawba tribe. There have been protests both for and against the Catawba Casino due to the amount of money the Cherokee may lose to the competition as well as the amount of money the contractors may lose from the casino not being built.

If that isn’t enough going on in the town, dead bodies start to pile up. First a prominent woman dies of natural causes, but then a body is found on her grave by unnatural causes. A Boston hit man is seen at the Cherokee casino and a young boy goes missing.

Can the boy be found before he dies or is killed? Why has someone stolen an artifact collection? Will Burin’ Barry end up in one of his own graves? Whew – it is hard to turn the pages fast enough to keep up with the action!

This is the sixth novel in this series. It reads very well as a standalone, there is just the right amount of back story to get a new reader up to speed, yet not too much as to bore readers of his previous novels. De Castrique also has another series which “explores the rich history of Asheville from Tomas Wolfe to Carl Sandburg” that sounds intriguing also.

I love the afterword which tells the reader the facts behind the novel. He explains there is a new casino coming in that will diminish the number of people visiting the Cherokee cultural centers as well as impact the much needed revenue to the Eastern Band of the Cherokee. It saddens me to see what has happened to the native people in our country.

Even though the underlying cause and events are serious, this mystery is full of quips and smart dialog that make the reader smile and possibly chuckle out loud. Barry is an awful card player yet finds himself participating in several games. The Cherokee officer Barry is working with, Romero, calls the sheriff “Rooster” after Rooster Cogburn. It is a term of endearment, and amuses me – I think it will amuse you too.

DISCLOSURE OF MATERIAL CONNECTION: I have a material connection because I received a review copy that I can keep for consideration in preparing to write this content. I was not expected to return this item after my review.

Time Management—Are We Busy or Fruitful?

Want to be a writer? Read Kristen’s blog! Today she reminds us that time is ours to use or waste – your choice! 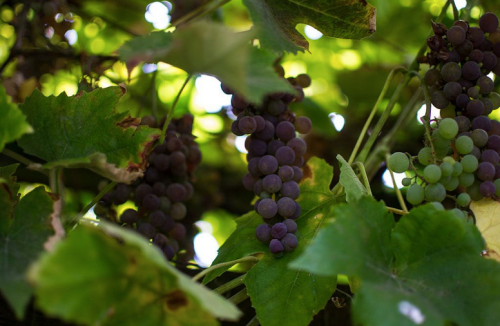 I do a lot of stuff. Actually too much stuff but I am totally woking on that saying “No” thing. Hey, I’m getting there. Two days ago I finally earned my fourth stripe on my white belt in Brazilian Jiu Jitsu. For those who don’t know, in BJJ, you are a white belt forever. It takes anywhere from a year to a year and a half to earn a blue belt. My next level is blue belt and I am stoked.

In BJJ, the blue belt is almost as big of a deal as black belt because most people never get that far. 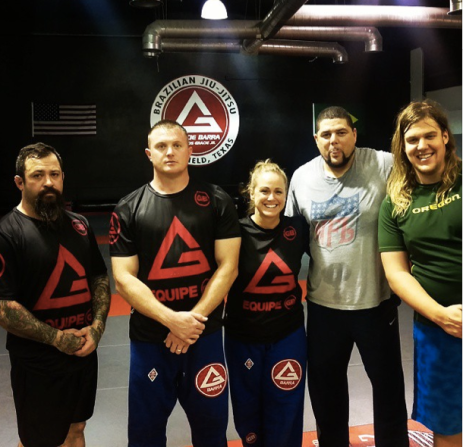